There are Ground Zeroes and Pearl Harbors and Dresdens, places where we collectively bow our heads and gasp at just how unfathomably barbaric life can be. And then there are our own private versions of these.

In 1987 I was traveling the world as a professional surfer, reveling in the heady buzz that comes from weekly contests, supreme physical fitness, fratboy-like camaraderie with my heroes, heart-thumping gropes with radiant 19-year-old girls in Capetown night clubs, when I received the news.

These words delivered by a kid I barely knew on the sand at Malibu Third Point in a moment when I was peacocking after a career-best finish in the Stubbies Pro not 24 hours earlier.

I ran to the pay phones, called Mom.

Yes, it was true.

Four years later I was profoundly in love, career nosediving, trying desperately to shake off LA, family, my own skin. I’d been in Brazil for a make-or-break pair of contests in which I choked.

Jetlagged, cocaine-deluded, I called my chocolate-hued baby after a long hiatus and—well, let’s just say that it would spell the end of my first love, the end of my career, the end of all I’d been dreaming about since I was 14.

It was not only the same pay phones but the same actual receiver that delivered me these life-changing blows. 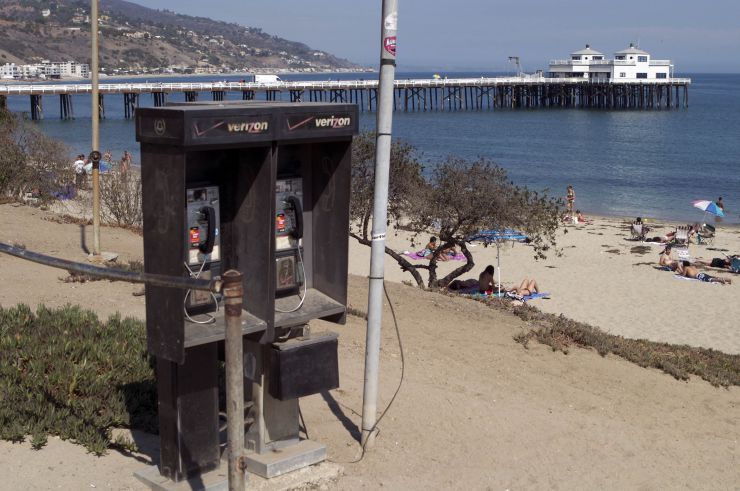 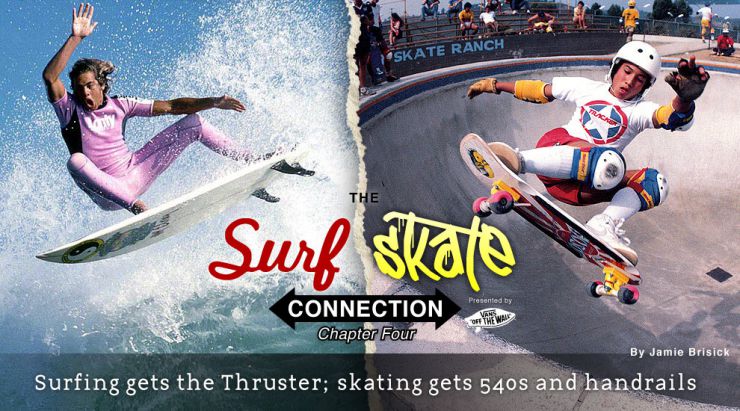 Guy tells his girlfriend he wants to part ways. Girl has a hard time accepting this. In a ploy to get guy back, she offers to help him clean his apartment. On a Saturday morning, Starbucks iced coffees in hand, Arcade Fire’s “The Suburbs” blaring on the stereo, he in sweats, she in a mini skirt and an extra squirt of perfume, they dust, vacuum, scrub windows. She remembers their 4th of July in Montauk, his annoying niece who could never pronounce her name properly, the white roses he sent her on her birthday (“red’s just way too obvious,” he insisted with that crooked smile). Warm sunlight. Beaming optimism. With a box of his dusty LPs in her arms, her foot suddenly skids across the hardwood floor, as if on a banana peel. “FUCK!” she shouts, the records tumbling everywhere, her ACL severely wrenched. Under her shoe she finds a soiled condom. The new girl. 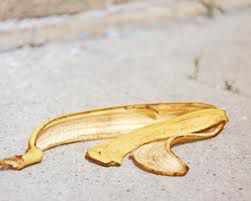 From “The Eighties At Echo Beach.” Photos by Mike Moir. 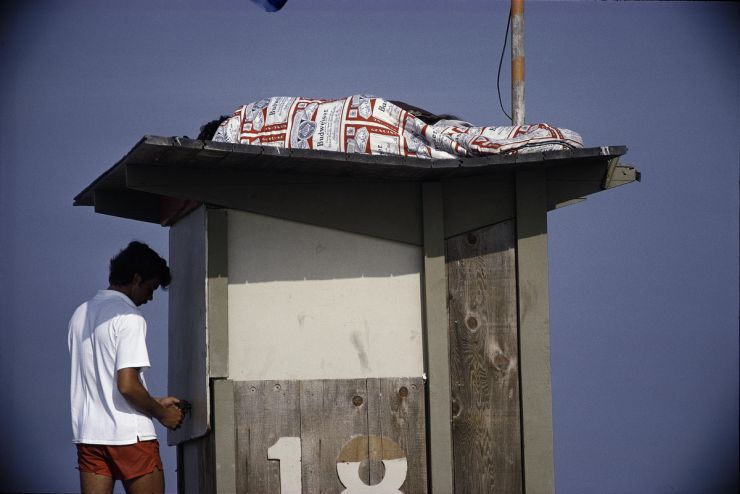 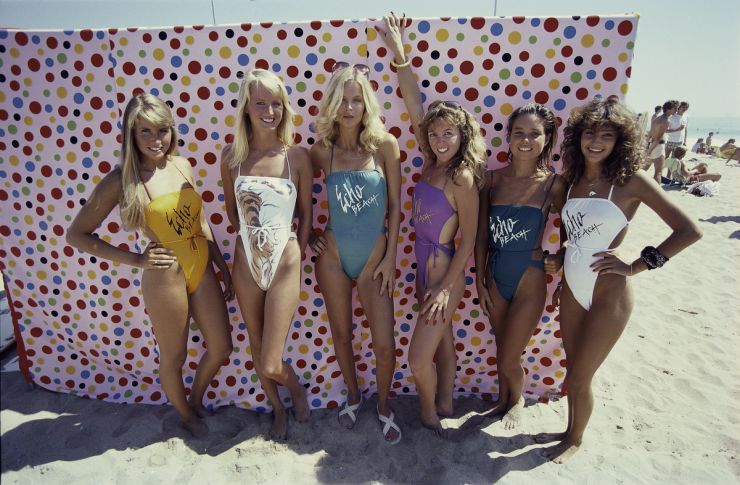 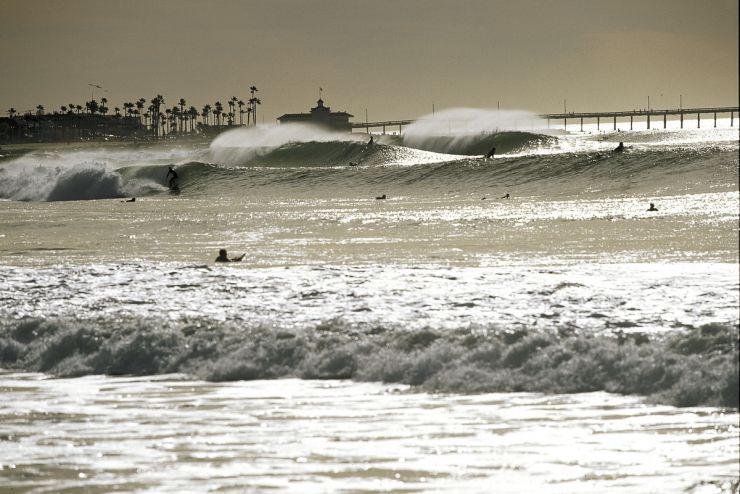 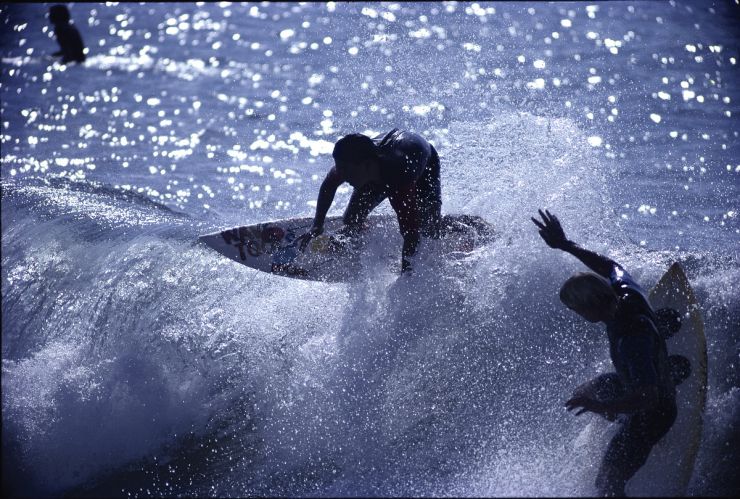 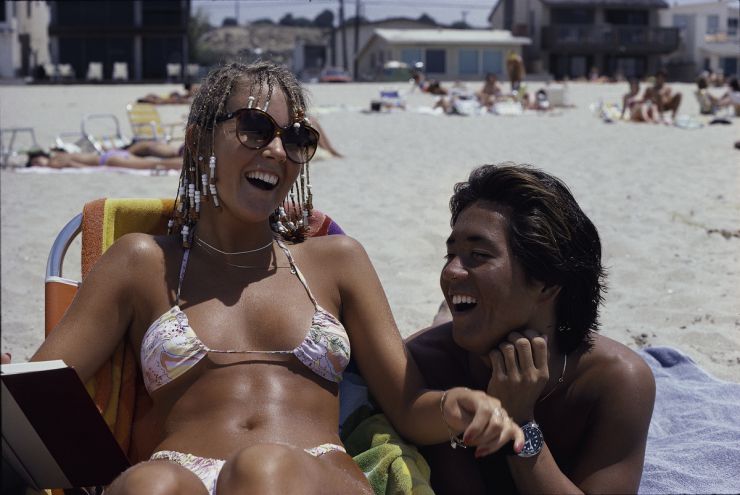 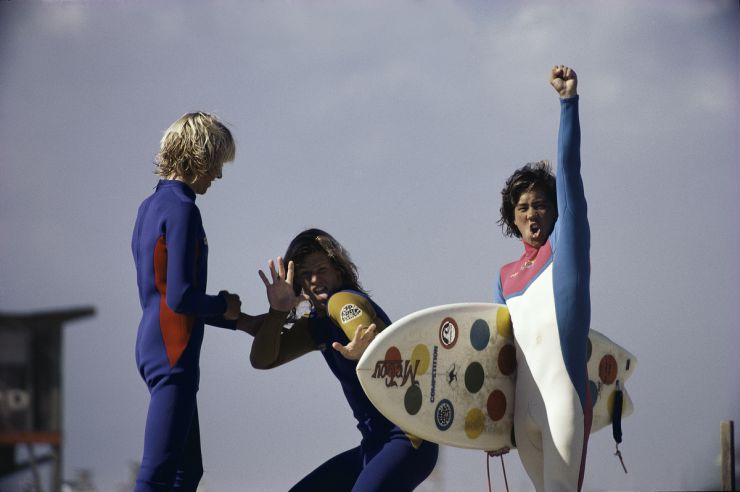 In New Orleans I couldn’t sleep, so I wandered down Bourbon Street, where goateed and paunchy tourists sipped daiquiris from hand grenade-shaped colored cups. A dominatrix-looking waif waved at me. I waved back. She waved me over. Two seconds later I was perched on a bar stool at Temptations. The bartender—tanned, muscled, shiny—was Southern friendly.

A billow of bad perfume disguised as a large-breasted dancer approached.  “Hi, I’m Melissa,” she said, offering her hand.

“Where you from, Frankie?” she asked, taking the seat next to me. She wore pink lace panties and pink pumps and a white wife-beater. I was reminded of the Good & Plentys I used to love as a kid.

“What brings you to New Orluns?”

She moved in close and placed her hand on my leg. “So what do you do, Frankie?”

I took a long pull from my beer. “I run a pool cleaning business out there in the San Fernando Valley.”

She skimmed her fingers over my wrist. “You married, Frankie?”

She softened. “I have a three-year-old daughter,” she said, smiling. “How old are your boys?”

“That’s such a fun age! What are their names?”

I looked off toward the stage. Def Leppard’s “Pour Some Sugar On Me” blared. A row of Japanese businessmen fingered dollar bills. A topless blonde swallowed a man’s head with her breasts.

“Trace and Chad,” I said, trying to repress my smile.

“Aw, Frankie! Look at you! You’re such a proud daddy!”

I took her hand. “Trace is the oldest, a real terror. Katey and I made him a deal. You bring home a decent report card, and we’ll get you that skateboard you’ve been askin’ for…” 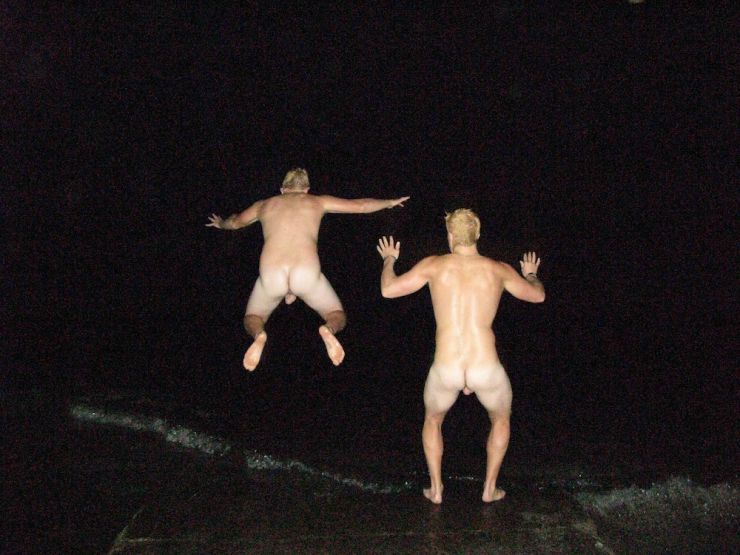 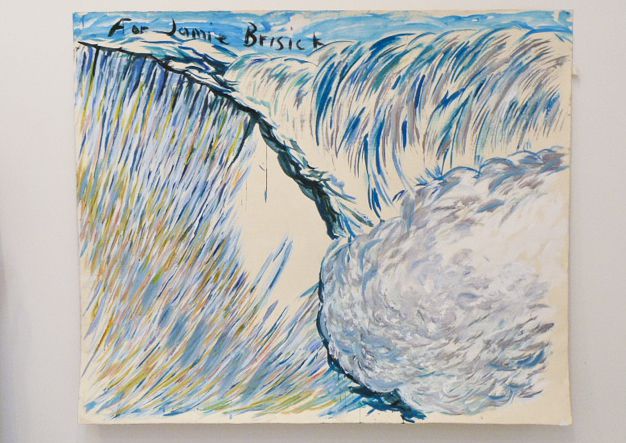 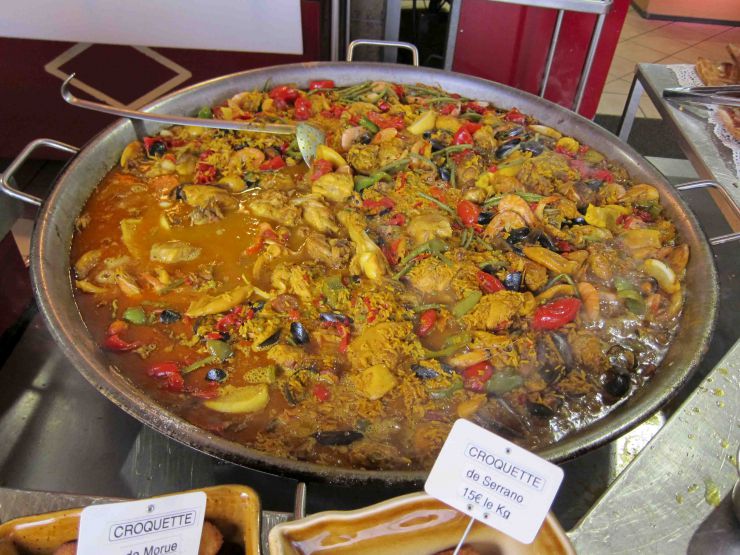 These are the official results of the first Gateau Basque World Championships held at Le Madrid in Guethary. 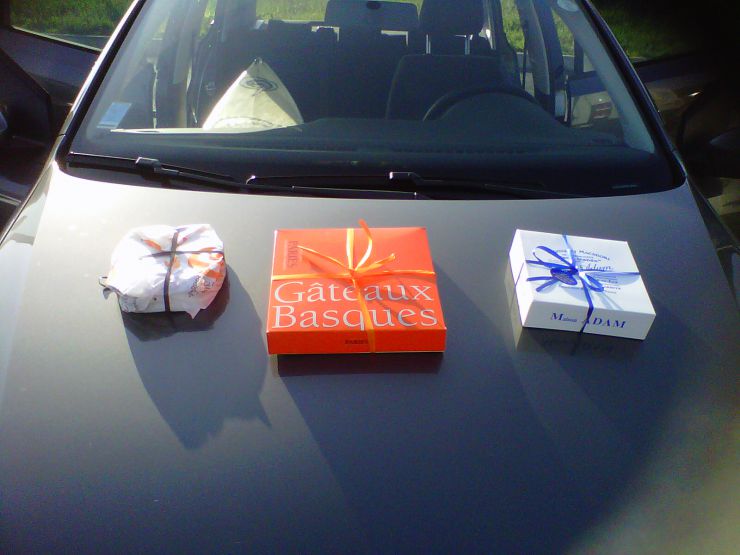 If I’ve got the story straight, the One Minute Disco traces back to a cassette tape that got stuck in a car stereo. Everywhere the driver went, the first sixty seconds of Billy Idol’s “Hot In The City” accompanied him. Rather than try to pry the tape out, he made it his theme song. When the car finally broke down, he thought it only right to memorialize this peculiar ritual.

For much of the Port Eliot Festival’s storied history, the One Minute Disco happened on the hour, every hour. Festival-goers would drop whatever they were doing, shake their hips and throw their hands in the air for sixty seconds, then go back and pick up where they left off, a kind of espresso shot, or prayer, or simulation of losing one’s virginity.

This year the One Minute Disco made a surprise appearance. On the final day, at exactly 8:00 p.m., a familiar-looking truck rolled through the festival grounds, making sporadic stops and liberating exhausted hips. As word spread, it became a kind of pied piper, a trail of bouncing bodies following behind. 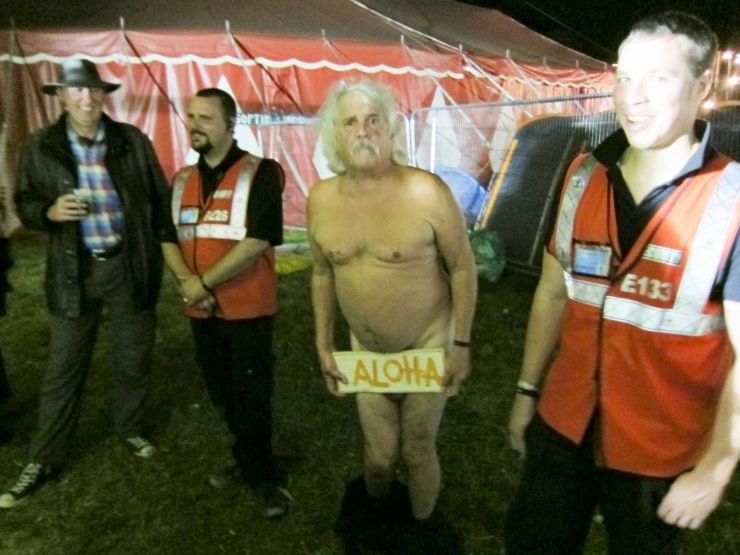