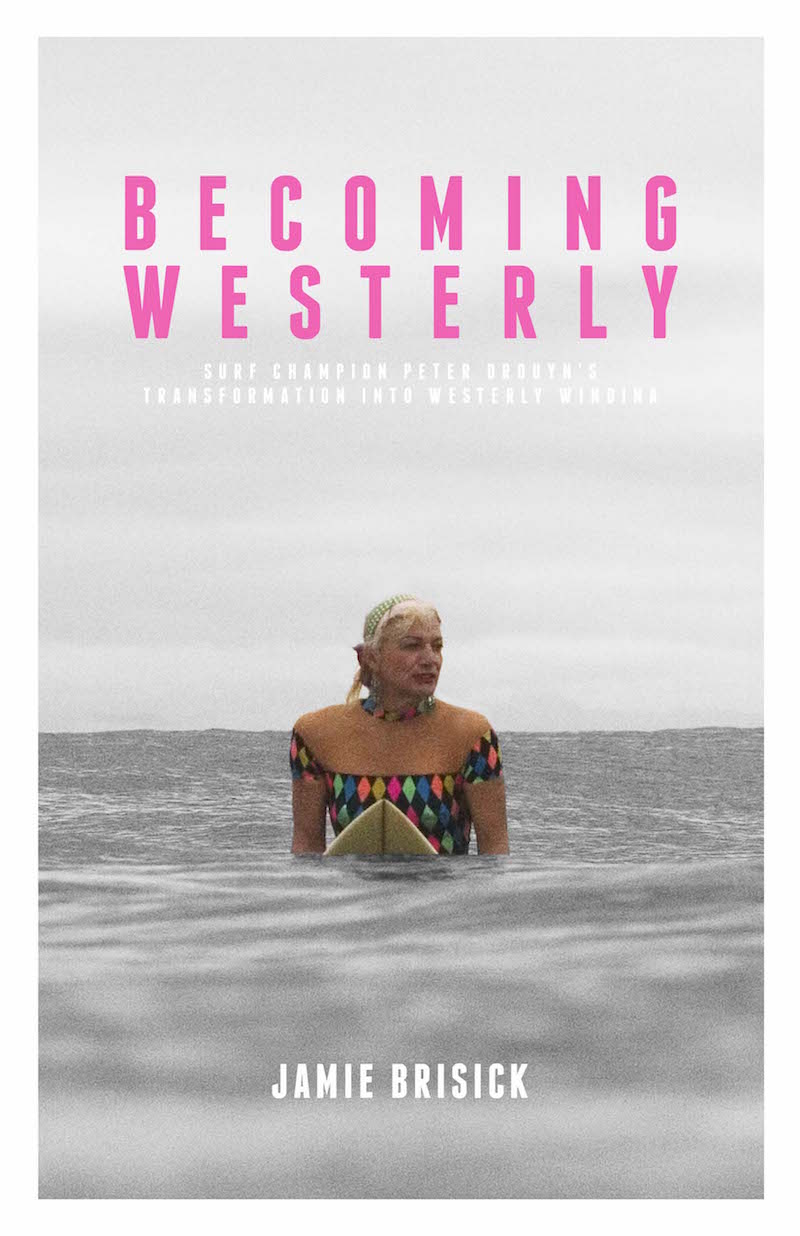 “In the conservative, boy's own world of contemporary surfing, Westerly Windina is a gale-force breath of fresh air. —Sydney Morning Herald

“BECOMING WESTERLY is much more than a book about a celebrated surfer who becomes a woman—in this case, a dude who becomes a diva. Brisick presents us with a case study of narcissism, of the pathology of celebrity, and a detailed look at the complex world of competitive surfing. It is a funny and painful book, too, and one I greatly enjoyed. —Paul Theroux, Mr. Bones: Twenty Stories, The Last Train to Zona Verde, The Great Railway Bazaar and Mosquito Coast

“Whitman wrote, ‘I contain multitudes,’ and he might have had this book in mind. BECOMING WESTERLY is the story of surfing great, Peter Drouyn, and his subsequent transformation, via a sex change operation, into aspiring diva Westerly Windina. But it’s also a tale of the writer, Jamie Brisick, and his efforts to understand what—for lack of a more specific term—it all means. In the process, this engrossing narrative raises a series of questions rather more profound than you might expect: Who are we? Where do we begin? Where do we end? Is there such a thing as destiny? Are we riding the wave or a part of it? And as with the best books, in the end it’s our own lives we examine. —Jim Krusoe, Parsifal

Roman and Williams Buildings and Interiors - Things We Made

“Things We Made is a soulful half-catalogue, half-scrapbook page-turner that chronicles the duo's somewhat rebellious, always innovative projects. —V Magazine

“Dark and brooding, filled with flowers and steam pipes, circles and stars, it’s the strongest book from any interior designer in the past half decade. —New York Daily News

THE EIGHTIES AT ECHO BEACH

“The book is a delight — and not just because of the gleefully loud ’80s fashions. Moir’s photos, as well Brisick’s words, pulse with teenage rebellion and attitude, celebrating the innocent hedonism of youth that transcends time and place.” ——Forbes

Have Board, Will Travel : The Definitive History of Surf, Skate, and Snow

“This eye-popping combination of text and photos is a celebration of the ongoing quest for the perfect line and the sheer, kinetic energy of riding gravity. Beginning with the earliest recorded board riders (Hawaii, 1778) through Malibu’s late-‘50s golden age, big gun boards, Tahoe half-pipes and X Games competition, Brisick has produced an evocative history of recreational boarding...Chock-full of photos and suspended action, vintage graphics, and a classic 1965 Life magazine cover on the ‘craze and menace of skateboards,’ the book captures an exhilarating jolt of eternally carving, rolling youth.” —Los Angeles Times

“Have Board, Will Travel...has the imagery that only a skilled storyteller and photographer can convey. And, perhaps most importantly, it’s penned by someone who’s been in the thick of it his whole life.” —Water

“Narrated as a series of flash-bulb turning points and insightful quotations, Have Board dutifully documents the decisive maneuvers that bred one sport into the other while artfully splattering the vibrant canvas of side-stance stoke...Whichever stick you call home, this book is a must-read, must-see, family history for you.” —Surfing

We Approach Our Martinis With Such High Expectations

“Jamie Brisick is a 21st century philosopher and genius-raving surf journalist and offers all that and more in Martinis.” —Surfing

“Jamie Brisick has revived my yearning for travel and adventure...He makes me want to return back to the water.” —Perry Farrell

“Big magazine has a pretty unique formula. Each issue is made in a different country utilizing a different set of contributors. This month, they've come to the shores of the U.S. and hired ex-Surfing magazine Editor-in-Chief Jamie Brisick and art-direction guru David Carson to do an issue titled simply "Surf."

Slightly oversized and printed on paper stock that would make most book publishers green with envy, the surf issue of Big gives its readers a kind of grassrootsy view of surfing through the eyes of such contributors as Drew Kampion, Nick Carroll, Derek Hynd, and C.R. Stecyk. With an eclectic mix-ture of articles that cover territory as diverse as interviews with Malia Jones and Steve Pezman; photos from SeaGaia Ocean Dome's wave pool in Miyazaki, Japan; and collages of photos and paintings; this issue of Big is a must-have for collectors of surf history.” —Transworld Surf